Amul (アムル, Amuru?), also known as Amur and Amru, is the main character from Dragon Spirit. Amul is a captain from the kingdom of Mitgult. When Zawell captured princess Alicia to be used as a sacrifice, the goddess Arlia transformed Amul into a Blue Dragon (ブルードラゴン, Blue Dragon?) to be able to rescue Alicia. Following the defeat of Zawell, the Blue Dragon is retransformed into Amul, who finds Alicia imprisoned in a glass chamber. She cries out "Amul!" and the chamber breaks. Alicia is returned to Mitgult, whose subjects rejoice at the return of their leader. Amul becomes the nation's hero, and the peasants prosper once again, free from fear of Zawell's ambition.

Amul appears in the prologue from Dragon Spirit: The New Legend. If Zawell wins the fight, Amul wakes up in bed and realizes Zawell does not exist; the whole event having been a nightmare. If Amul wins the fight, Amul and Alicia married and had twins named Lace and Iris. However, Amul was wounded in the battle against Zawell, and his disease progressively worsened. His fate is unknown.

Amul appears as a playable character in the game Namco Super Wars, and as a boss in his Blue Dragon form if he had not joined the party in the beginning, joining later after his defeat in stage 10.

He has a cameo appearance as the Blue Dragon in Marvel Land and also appears in Pro Yakyuu Famista 2011. A member from the Namco Stars team is named after him.

Amul transformed in a Blue Dragon. 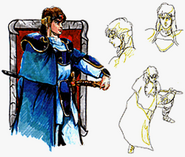 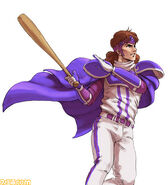 Blue Dragon in Namco Super Wars.
Add a photo to this gallery
Retrieved from "https://namco.fandom.com/wiki/Amul?oldid=9086"
Community content is available under CC-BY-SA unless otherwise noted.