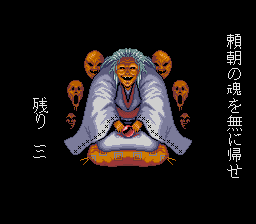 Andaba (安駄婆, Andaba?) is a character from Genpei Tōma Den and its sequel Samurai-Ghost that appears to be based on the old woman Datsue-ba from Japanese mythology. Andaba is responsible for transporting the dead through the Sanzu River, and revives Taira no Kagekiyo so he can face Minamoto no Yoritomo and his allies. In Kagekiyo is defeated in the first game, she can revive him again in exchange of a large amount of money.

Andaba also appears in Namco × Capcom as an NPC ally and a shopkeeper in early chapters. She returned Kagekiyo from the Yomi-no-Kuni so he can defeat his revived foes, and says that Enma Dai-Ō ordered him to travel with Tarosuke. Andaba is voiced by Eriko Kigawa.

Andaba dressed as Wonder Momo in Namco Museum Encore.
Add a photo to this gallery
Retrieved from "https://namco.fandom.com/wiki/Andaba?oldid=4983"
Community content is available under CC-BY-SA unless otherwise noted.