Anshar (アンシャー Anshā) is a mysterious demon that appears in the opening from the PC Engine version of The Tower of Druaga and in the prologue of The Blue Crystal Rod to say to Gilgamesh that Ki was captured by Druaga. In The Blue Crystal Rod, he is secretly manipulating the Sumer Empire.

Anshar also appears in Seme COM Dungeon: Drururuaga. In the game, Succubus kidnaps Kalia in Babylim and takes her to Anshar.

In The Nightmare of Druaga: Fushigino Dungeon, Anshar is mentioned by the clerk Kiria after defeating the Akynd Knight in a side-quest. She says Anshar is a demon that used to be Druaga's henchman, who betrayed him, and the Akynd Knight was Anshar's right-hand man. He is also mentioned in all parts of the Akynd Knight's armor set, which says he is an evil god that created the armor. 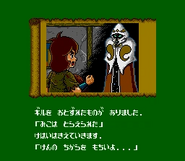 Anshar in the PC Engine version of The Tower of Druaga.

Anshar as depicted in the manual of The Blue Crystal Rod

Anshar with Kalia in Seme COM Dungeon: Drururuaga.
Add a photo to this gallery
Retrieved from "https://namco.fandom.com/wiki/Anshar?oldid=9736"
Community content is available under CC-BY-SA unless otherwise noted.