Arlia (アーリア, Āria?), also known as Aria, is a sun goddess from the game Dragon Spirit. In ancient times she fought against the demon of darkness Zawell and defeated him. When Zawell resurfaced, she transformed Amul into a powerful Blue Dragon so he could save princess Alicia from Zawell.

In Dragon Saber, Arlia gave a sacred saber to Huey and Siria, allowing them to change into dragons to save the Earth. Arlia had confined an evil spirit within her body, but it took control over her and she became Chaos (カオス, Kaosu?). With their dragon forms, Huey and Siria freed Arlia from the evil spirit, returning her to normal. Arlia than entrusted the planet to them.

Goddess Arlia appears as a playable character in Namco Super Wars. Like Dragon Saber, she became Chaos, and fights against the heroes alongside Zouna, Dahaka, Druaga Soul and Yoritomo. After defeating Chaos, she returns to normal and joins the party. 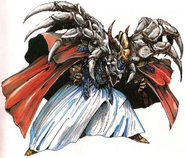 Arlia in Namco Super Wars.
Add a photo to this gallery
Retrieved from "https://namco.fandom.com/wiki/Arlia?oldid=6376"
Community content is available under CC-BY-SA unless otherwise noted.