Assault (アサルト, Asaruto?) is an arcade game released by Namco in 1988. It was also released for Virtual Console in 2009 and as part of Namco Museum Vol. 4 compilation in 1996.

In the year 2199, the world's population reached the saturation point. To find a new planet Earth, the Pilot 1 planetary explorer was launched, with 1000 scientists and engineers and 2000 military personnel aboard. The mission was a gamble for the human race. 35,000 light-years from the Milky Way, Pilot 1 found a planet with floating continents. Detecting a strong life reading from the planet, Pilot 1 sent out a landing team and quickly occupied the planet. However, there was an amazing fact: the civilization of this planet was far more advanced than Earth's, yet they never had war. More puzzling still, the native population completely vanished right after the conquest. Fearing for the safety of the second generation against a counterattack by the natives, the settlers strengthened their positions by building a series of fortresses on the planet. Although this was for the protection of the settlers, they had no right to rule by force. The player takes the role of a native fighter, who must crush this mighty military state to save the planet.[1]

By controlling a tank, the player must reach the end point within the time limit while battling enemy tanks. Each round is cleared by destroying the enemies' fort. The tank's weapons consist of normal shots and grenades. There are 11 rounds in all. If the player lose all lives, the game is over.

Assault Plus is an upgraded version of Assault released in 1988.

The tanks in the game were designed by Kunio Okawara.[1]

My Tank (マイタンク) - The player's tank, able to fire normal shots and grenades.

Underwater Tank Type 4 (4型水中戦車) - Two tanks coupled for amphibious use. The front tank can fly. 1500 Points for each tank.

Tank Type 6 (6型戦車) - A heavy destroyer tank with continuous fire from a high-energy cannon. It is turtle shaped and moves slowly. 1500 Points.

Tank Type 7A (7型戦車A) - A heavy main-force tank armed with a rotating turret. Fires two missiles at once. 2500 Points. 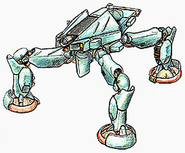 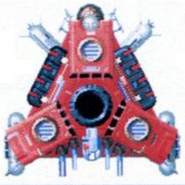 Warriors - In contrast to the settlers from Earth, these are the original inhabitants of the Floating Continent. 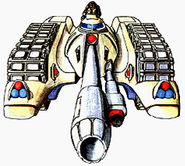 Top view of My Tank.

Bottom view of My Tank.

Top view of My Tank.

Bottom view of My Tank. 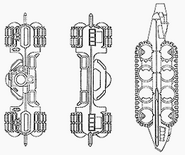 Front, back, and side view of My Tank. 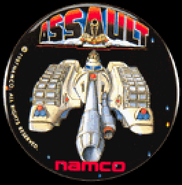