Bomb Bee (ボムビー, Bomu Bī?) is a Breakout clone arcade game developed and released by Namco in 1979 in Japan only; it runs on Namco , and is the sequel to Gee Bee, released a year earlier; and much like its predecessor, was also developed by Toru Iwatani, who would later create Pac-Man and Pole Position. The name for the game was taken from the 1,000 point pop bumper that can be destroyed after clearing a set of bricks at the top of the screen.[1] A variation of the game, Bomb Bee-N, was later released in 1979 by Nintendo that utilized their tabletop arcade cabinets.

Bomb Bee was included as a secret game in the Japanese version of Namco Museum Vol. 2 in 1996 for the PlayStation, along with its sequel title, Cutie Q. A PC-9801 port of both this and Cutie Q are rumored to have been in development by Mindware, but were ultimately cancelled and no prototype has surfaced.[2]

Much like this game's predecessor, the player uses the rotary knob on the control panel to maneuver a set of paddles across the screen, and must prevent the ball from leaving the screen. The ball can destroy the various rows of bricks and hit the two 10 point-worth pop bumpers at the top of the screen, which can be increased to 100 points-worth should the player clear out the side rows of bricks. The center of the screen has five rollover lights than spell out "NAMCO", and lighting all of them up will increase the bonus multiplier. The ball will move much quicker should it hit the paddle six times, and can be slowed down by hitting the spinner (which will also turn orange should this happen). Destroying the top formation of bricks will make a pop bumper appear, which is worth 1,000 points when hit. The ball can hit it ten times before it explodes, as a new set of bricks appears in its place. 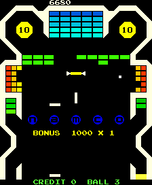 Gameplay.
Add a photo to this gallery

Retrieved from "https://namco.fandom.com/wiki/Bomb_Bee?oldid=8616"
Community content is available under CC-BY-SA unless otherwise noted.