Burning Force (バーニングフォース, Burning Force?) is a shooting arcade game released by Namco in 1989 only in Japan. The game was later ported to the Sega Mega Drive (Sega Genesis) in 1990 and for the Wii's Virtual Console in 2009. The Mega Drive version was also released in Europe, North America, and South America.

A Sharp X68000 version was also in development at one time (but its home port was never released). SNES and Neo Geo port were planned, but were cancelled.

The player controls Hiromi Tengenji, a 21-year old cadet piloting the air bike SIGN DUCK that is taking her final exam to become a space fighter. 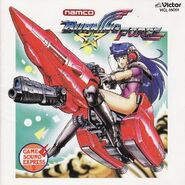