When young, Clovis was a mischievous child. He was placed under the care of a monk, who trained him rigorously, and became a capable fighter. When a dragon captured princess Celia, Clovis went after the dragon to save her, facing several monsters during his journey.

Clovis is a Dragon Valor seeking a dragon for revenge.

This is a list of game appearances for Clovis Barclay. References, such as costumes, are not counted. 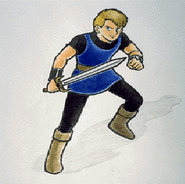 Namco Super Wars
Add a photo to this gallery

Retrieved from "https://namco.fandom.com/wiki/Clovis?oldid=9477"
Community content is available under CC-BY-SA unless otherwise noted.