Cosmo Gang the Puzzle (コズモギャングザパズル, Kozumo Gyangu: Za Pazuru?) is a falling-tile puzzle arcade game released in 1992 by Namco in Japan only; it runs on Namco NA-1 hardware, and is the sequel to Cosmo Gang the Video, released a year earlier, and is also the third game in the Cosmo Gang series. A Pac-Man-themed reskin was released in 1993 as Pac-Attack for the Super Nintendo Entertainment System and Sega Genesis, with a Game Gear and Game Boy port being released shortly after. The original game was ported to the Super Famicom in 1993, and both versions of the game would be ported to the Wii Virtual Console in 2009, exclusively for Japan.

Much like other falling-tile games, the player must stack red Containers and pink Jammers by using the joystick, and using the button to rotate the tiles. Containers can be cleared by aligning them in a horizontal row, while Jammers can be cleared should the player get a Blue Ball, which will point in the direction it will move, and will disappear if it reaches a dead end. If enough Jammers and Containers are eliminated, a star will appear, which will eliminate any Jammers left on screen. The game's two player mode features the "Pipopapo-Tai", exclusive to the second player, which function the same as Jammers. Additionally, any Jammers removed from one side of the playfield will be tossed into the other's playfield. The game is over should the Jammers and Containers reach the top of either player's screen. 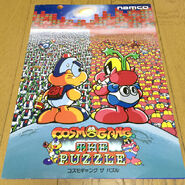 Arcade flyer.
Add a photo to this gallery

Retrieved from "https://namco.fandom.com/wiki/Cosmo_Gang_the_Puzzle?oldid=8643"
Community content is available under CC-BY-SA unless otherwise noted.