Dig Dug (ディグダグ, Digu Dagu?) is an arcade game developed and published by Namco in Japan in 1982, and later published outside Japan by Atari. The game was later ported for several consoles and included in compilations such as the Namco Museum series.

The player controls Taizo Hori (originally known as Dig Dug in the time the game was released) to eliminate the underground-dwelling monsters Pooka and Fygar by inflating them until they pop or by dropping rocks on them.

From the commercial when Dig Dug has launch in the television, include the Atari, Inc.

Lyrics Yumi-tachi Kimio / Nakazawa Jun composer: Keino Yuriko Arrangement: Bei-ko Ryo song: Masa around Are given for the lyrics to the first installment of BGM. " video game graffiti included on ". 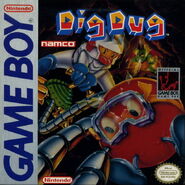 MSX cover art
Add a photo to this gallery

Retrieved from "https://namco.fandom.com/wiki/Dig_Dug?oldid=8151"
Community content is available under CC-BY-SA unless otherwise noted.