Dr. Bomb, known as Dr. Bakuda (爆田博士, Bakuda Hakase?) in Japan, is the main antagonist and final boss from the game Bravoman. He also appears in the beginning of every stage and in the game over screen. He has a mushroom cloud hairstyle, and has a robotic claw for a left hand.

Dr. Bomb has a brief appearance in the prologue of the game Namco × Capcom, where he works for Heihachi Mishima.

Dr. Bomb reappears in the Bravoman ShiftLook comic. He has a cucumber-es. hairstyle instead of a mushroom cloud shape. His son is Anti Bravoman. 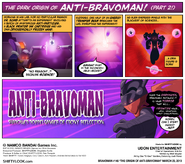 Dr. Bomb in Namco X Capcom
Add a photo to this gallery

Retrieved from "https://namco.fandom.com/wiki/Dr._Bomb?oldid=7855"
Community content is available under CC-BY-SA unless otherwise noted.