Dragon Saber (ドラゴンセイバー, Doragon Seibā?) is a vertical shooter arcade game released by Namco in December 1990. It is the sequel of Dragon Spirit and allows two players to play simultaneously. Dragon Saber was ported for PC Engine and Virtual Console, and is included in compilation Namco Museum Encore for PlayStation.

In a different world that is very similar to Earth, the human beings build an advanced civilization and have repeated their foolish history, because of their own selfish desires. As a result, everything around then has been to come to nothing. Advanced alchemy has caused environmental disruption that caused chaos on the ecosystem. Subsequently, the world has been filled with evil bio-monsters, and the human beings have been threatened with extinction.

Two brave young persons, Huey and Siria, are trying to make the planet beautiful again. The sun goddess Arlia appeared from the sky and granted them a sacred saber that allows them to change into powerful dragons, giving them the strength to fight against the horde of monsters that habit the planet. 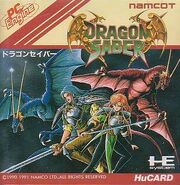 PC Engine cover.
Add a photo to this gallery

Retrieved from "https://namco.fandom.com/wiki/Dragon_Saber?oldid=8207"
Community content is available under CC-BY-SA unless otherwise noted.