Gilgamesh (ギルガメッシュ, Girugamesshu?), also known as Gil for short, is the main character from the Babylonian Castle Saga. He is based on the Gilgamesh of Sumerian legend.

Prince Gilgamesh is the son of Marduk, the king of Babylim, and he lived in peace with his friend Ki with the divine protection of the Blue Crystal Rod until the Sumer Empire invaded the kingdom. His father died in the invasion, and Gil was enslaved alongside other people from Babylim to work in the construction of a large tower to the Sumerians obtain the Blue Crystal Rod. Later, the demon Druaga took over the Tower of Druaga and the Blue Crystal Rod, and now rules over the kingdom. During the time Gil was enslaved, he got hurt and Ki aided him. Without his knowledge, the maiden Ki prayed to Ishtar and she gave her the task to recover the Blue Crystal Rod, but Ki is captured by Druaga in the events from The Quest of Ki. When Gil discovered what happened, he asks the gods to help him have the power to rescue her, and is granted with a magic golden armor.

The Quest of Ki[edit | edit source]

Gil is absent in the story of the game, but he has a cameo appearance in the end of the extra floors to compliment the player alongside Ki.

The Tower of Druaga[edit | edit source]

In the game The Tower of Druaga, Gil faces the perils of Druaga's tower, and not only must Gil use his sword and shield to navigate through the labyrinthine floors of the tower, he must use his wit and memory to reveal the locations of the treasures contained on each floor, some of which are absolutely necessary for Gil's success. During his adventure, Gil becomes more powerful and he manages to recover the Blue Crystal Rod that was with Succubus, kill the demon Druaga, and rescue Ki.

The Return of Ishtar[edit | edit source]

The game starts in the top of the Tower of Druaga. After saving Ki and obtaining the Blue Crystal Rod, Gil and Ki must find a way to exit the tower, which is now in ruins and filled with monsters.

The The Blue Crystal Rod begins with Gil and Ki leaving the Tower of Druaga, and they talk with Ishtar, who gives them the task to return the Blue Crystal Rod back to the sky. As the story is affected by the player's decisions, the destiny of Gilgamesh and Ki differ, varying from Gil becoming the king of Babylim, leaving Babylim, becoming a warrior of the gods, or being transformed into a statue.

The Nightmare of Druaga: Fushigino Dungeon happens three years after Druaga's defeat. Gil and Ki would soon marry, but a evil sorceress named Skulld captured Ki and took her to the ruins of the Tower of Druaga. Gil goes after her but is defeated by Skulld, and she creates a barrier in the area. He awakens in his room and goes after the Chronos Orbs, which is the source of Skulld's powers. After destroying the orbs, Skulld loses her powers and the barrier is gone, allowing Gil to save Ki. However, Ki and Skulld disappear, and he travels to a sanctuary to ask Ishtar what happened. Ishtar explains the reason they disappeared and that the Blue Crystal Rod obtained by him was a fake, and to make Ki return, Gil must return in time and defeat Druaga again, this time obtaining the real Blue Crystal Rod. Gil succeeds and than returns the Blue Crystal Rod to Anu.

Gil is mentioned in several parts of the game and he can be summoned with the Spell Card #24.

Gilgamesh is a playable character in Druaga Online: The Story of Aon, The Labyrinth of Druaga, and Sugoroku Adventure: The Tower of Druaga.

Gilgamesh is a playable character.

Gilgamesh and Ki are playable characters as a single unit, were Gil attacks at close range and Ki at long distances. They can also use a Multiple Assault with Arthur from the Ghosts 'n Goblins series.

Gilgamesh is a habitant from the Fantasy World, and he is known for being the hero that defeated the demon Druaga. Gil reunites Stahn Aileron, Rutee Katrea, Klonoa and Gantz in the ruins of the Tower of Druaga in Epilogue 2 to talk with them about the Eye of Atamoni, and they battle against Joka, Moos, and some of Druaga's Blue Knights and Slimes. Kurino Sandra and Sabine appear in the area and helps them defeat the monsters, but they leave afterwards, and Klonoa and Gantz later leave the group. Gil and the others meet with Arthur in the way to Joilant, where Gil and Ki go after the Black Valkyrie while Stahn, Rutee, and Arthur search for the Eye of Atamoni. In Chapter 15, Gilgamesh and Ki join the party. After defeating all enemies, everyone in Joilant is transported to Ibis Island, and the battleship Woglinde is in the island. The party goes inside the battleship and they face Black Valkyrie again, and Valkyrie joins the group in Chapter 16. In Chapter 19, Gil reunites with Arthur, Stahn and Rutee, and Red Arremer Joker reveals that Druaga rebuilt his tower in the Makai. Gil goes to the Tower of Druaga in Chapter 35, and defeats Druaga in Chapter 37.

Gilgamesh is a playable character.

Gilgamesh appears in some of the extras from the Namco Museum game compilations, in a stage from Marvel Land, and as a costume in Tales of the World: Narikiri Dungeon 3.

In other media[edit | edit source]

In the anime The Tower of Druaga: The Aegis of Uruk and its sequel The Tower of Druaga: The Sword of Uruk, Gilgamesh is the hero that defeated Druaga 80 years ago and now rules as a benevolent king. In The Aegis of Uruk, Gilgamesh moved to the city Meskia and Pazuzu attempted to assassinate him while sleeping, but he survived the attack. In the last episode, Gilgamesh killed his aide Marf. In The Sword of Uruk, it's revealed Gilgamesh was cursed by Druaga with immortality, and during the anime he has an erratic behavior. He slowly becomes a tyrant, and the people revolt against him. Gilgamesh dies and in the last episode his spirit watches his funeral with Ki. Kaaya is his great-granddaughter.

Gil in The Tower of Druaga. 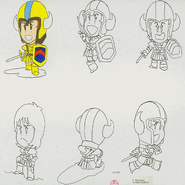 Concept artwork of Gil for The Tower of Druaga. 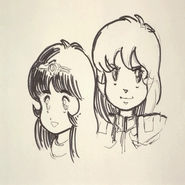 Concept artwork of Gil and Ki for The Tower of Druaga. 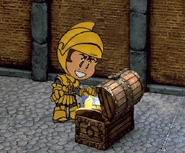 The Tower of Druaga. 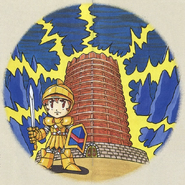 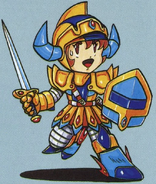 The Nightmare of Druaga: Fushigino Dungeon

Druaga Online: The Story of Aon

Gil from The Tower of Druaga: The Recovery of Babylim.

Gil in the anime.

King Gil in the anime. 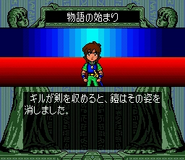 Gil in The Blue Crystal Rod. 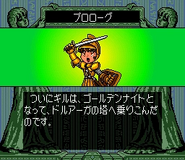 Gil with the golden armor in The Blue Crystal Rod. 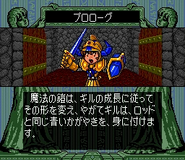 Gil with the hyper armor in The Blue Crystal Rod.

Gil and Ki outside the Tower of Druaga in the manual for The Blue Crystal Rod. 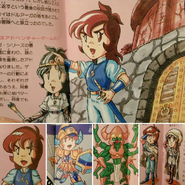 Various images of Gil in the manual for The Blue Crystal Rod. 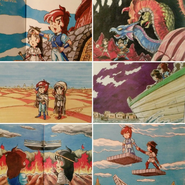 Various images of Gil and Ki in the manual for The Blue Crystal Rod.

Gil and Ki in the manual for The Blue Crystal Rod.

Gil surprised to see Pac-Man come out of a treasure chest.

Gil appears in the loading screen in Namco Museum Vol. 3.

Sugoroku Adventure: The Tower of Druaga 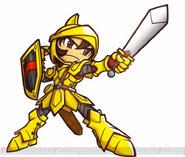 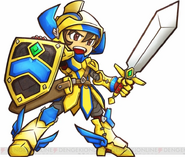 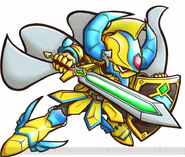 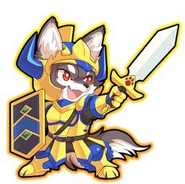 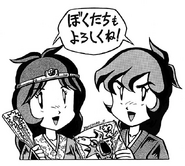 Promotional artwork of Gil and Ki.

Gil giving a flower to Ki.
Add a photo to this gallery
Retrieved from "https://namco.fandom.com/wiki/Gilgamesh?oldid=10093"
Community content is available under CC-BY-SA unless otherwise noted.