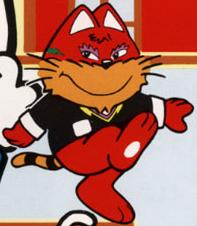 Goro, known as Nyamco (ニャームコ, Nyamco?) in Japan, is the big boss red cat of the Meowkies. He and his Meowkies will try to get Mappy whenever possible.

In Mappy, Goro is a crook that steals paintings, safes, and other objects, which Mappy must recover. If he hides behind the stolen goods and the object with him is collected by Mappy, the player gains 1000 points. If the message says, "Hurry!", and the music plays faster, the Goro Coin will appear when the dinging sound and the music end.

In the NES game Mappy Land, Goro descended anything in one level, the coin is the only item that Mappy can use to distract Goro. The fish only distracts the Meowkies.

Goro appears as an enemy in the extra levels from The Quest of Ki.

Retrieved from "https://namco.fandom.com/wiki/Goro?oldid=9844"
Community content is available under CC-BY-SA unless otherwise noted.