Guntz (ガンツ, Gantsu?), known as Gantz in the North American version of Klonoa 2: Dream Champ Tournament, is a character from the Klonoa series. Guntz is a confident bounty hunter known by the nickname "Kin'iro no Shinigami" (金色の死神, "Kin'iro no Shinigami"? lit. "Golden God of Death") that carries several weapons and drives the air bike Red Clan (レッドクラン, Red Clan?). In Klonoa Heroes: Densetsu no Star Medal he searches for Janga to avenge his father's death. Guntz is one of the participants from the events in Klonoa 2: Dream Champ Tournament and Klonoa Beach Volleyball. 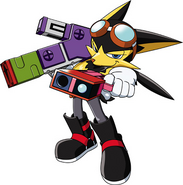 Concept art
Add a photo to this gallery
Retrieved from "https://namco.fandom.com/wiki/Guntz?oldid=9333"
Community content is available under CC-BY-SA unless otherwise noted.