Jin Kazama (風間 仁, Kazama Jin?) is a fictional character from the Tekken franchise. He made his first debut in Tekken 3 and became the main protagonist of the Tekken franchise (even though he an anti-hero in Tekken 6). Outside the video games, Jin has also appeared in the animated adaptations from the games as well as the Tekken live-action film. Jin was created to be the new protagonist of the series whose constant fights with his family members would eventually lead him to become an apparent antagonist as crafted by the director, Katsuhiro Harada. Critical reception to him has been mostly positive with comments focused on his role within the story and techniques.

Trained by his grandfather, Heihachi Mishima in order to enter the King of Iron Fist Tournament, Jin wishes to avenge his mother's apparent death. However, during the tournament, it is revealed that Jin possesses the Devil Gene (デビルの血, Debiru no Chi?, Lit. 'Devil's blood'), a genetic abnormality within his body, which causes the betrayal of Heihachi who wants to take it. He is also antagonized by his father, Kazuya Mishima, from whom he inherited the gene. While dealing with them, Jin loses control of the Devil Gene, which causes his transformation into an alter-ego named Devil Jin (デビル仁, Debiru Jin?), who was debuted as a fully playable character in Tekken 5.

His personality is gentle and reserved with a cocky side. From Tekken 5 we see his kind side in his and Hwoarang's interludes and in Hwoarang's Tekken 4 ending. Jin eventually becomes corrupted with the devil gene and becomes cruel, sarcastic and detached from Tekken 6 onwards. Jin Kazama is an introvert and has a Fatalistic/philosophical view on things. He's also strategic in attaining his goals and in his fighting style.

Known as the child of destiny, Jin is the son of Kazuya Mishima and Jun Kazama and the grandson of Heihachi Mishima. He was raised by his mother Jun for 15 years. When Jun was attacked by Ogre, Jin swore to avenge his mother and goes to train with his grandfather, Heihachi Mishima.

During Tekken 3, Jin destroys Ogre in the tournament, but is betrayed by Heihachi. Jin's Devil Gene allows him to survive Heihachi's attack and escape.

During Tekken 4, Jin enters the 4th King of the Iron Fist Tournament, though he fought Hwoarang and defeated him, Jin would also receive the opportunity to fight against his allegedly dead father Kazuya, but he never had the chance because he was found by the Tekken force. Jin was defeated and captured.

During Tekken 5, he would escape from the Tekken force while his father and grandfather fight each other and joins another King of The Iron Fist Tournament. He again fights Hwoarang but loses to him. This causes Jin to give into the Devil Gene inside of him and defeats him while under the influence of the Devil Gene. He then would fight his great-grandfather Jinpachi Mishima and defeat him. Soon after, Jin becomes the new CEO of the Mishima Zaibatsu and the commanding officer of the Tekken Force.

Before the events of Tekken 6, Jin moves for a corporate takeover by the Mishima Zaibatsu. He would use the Tekken Force to conquer most of the world and space colonies. His only competition is his father's company: The G Corporation who has made Jin the company's enemy. With it, Jin hosts another King of The Iron Fist Tournament. It was revealed at the end of the scenario campaign that Jin started the war in order to eradicate Azazel, but also rid himself of the devil gene by sacrificing himself. However, during the last scene, it is revealed that he survived the ordeal and the devil gene is still within Jin.

During Tekken 7, he was captured by UN forces and to be taken into custody, however, the devil gene within him surfaced and caused the helicopter to crash. He was eventually saved by Lars and managed to recover at the end of the game, vowing to kill Kazuya and end the war.

He retains most of his cruel intros and winposes in Tekken 7 which show Jin is still corrupt.

Jin is a playable character in Namco × Capcom, where he joins forces with Ryu and Ken Masters from Street Fighter and seeks to defeat Devil Kazuya who was his father through the Devil Gene.

He appears on a promotional poster for the Namco-produced crossover fighting game Tekken X Street Fighter, along with Street Fighter's Ryu (as well as their alter egos "Devil Jin" and "Evil Ryu", respectively). The Capcom-equivalent game, Street Fighter X Tekken, features Jin as a playable character, with Ling Xiaoyu as his official tag partner.

Is a playable character in Tekken Tag Tournament 1 and 2. In the first one he has positive netsu for Jun Kazama and Heihachi Mishima. Has special tag throws with the two, Ling Xiaoyu, Kuma/Panda and his father, Kazuya Mishima. Jin Kazama has a special intro with Hwoarang in TTT1.

Jin has a special tag throw with Nina Williams, Hwoarang, Lars Alexandersson and Asuka Kazama. Jin Kazama also has a new special tag throw with his mother Jun Kazama. He retains most of his old ones with the Mishimas, Kuma/Panda and with Ling Xiaoyu/Miharu Hirano. He has special winposes with the Mishimas, his mother, Nina Williams, Hwoarang, Ling Xiaoyu, Zafina, Miguel and with Asuka Kazama.

Portrayed by Jon Foo in the Tekken live action movie (2010). Film was directed by Dwight H. Little and takes place in 2010. The movie has a similar story to the period before Tekken 3 where Jin is living with his mother but in North America.

Appears in the Tekken Blood Vengeance movie breifly at the begining and at the end in a three way fight with the Mishimas. The movie is not canon to the series as claimed by series director Katsuhiro Harada and set between Tekken 5 and Tekken 6. It is a schoolgirl anime film featuring Ling Xiaoyu and Alisa Bosconovitch as the leads.

Jin appears in the game Project × Zone, with Ling Xiaoyu as his partner. In Project x Zone 2, his father Kazuya Mishima is his partner. 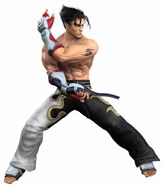 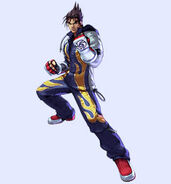