Kamooz (カムーズ, Kamūzu?, also translated as Kamuz) is the final boss from Valkyrie no Densetsu, a demon with red skin and four arms that wants to control the world by using the Golden Seed. He was defeated by Valkyrie and Sandra.

In the remake of Valkyrie no Bōken: Toki no Kagi Densetsu from Namco Anthology 2, Kamooz appears as a boss in the Makkou Continent with a different appearance. He uses a large mace as weapon and can attack with ice stalactites and fire. Kamooz escapes after the battle.

Kamooz is the first boss from the game Namco Super Wars, where he has his appearance from the Valkyrie no Bōken remake.

Kamooz also appears as an enemy in the crossover Namco × Capcom, where he has his original four-armed appearance. He first appears in Chapter 24. He returned in Project X Zone 2, debuting in Prolouge 5. 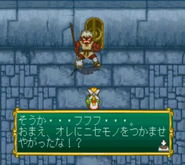 Kamooz in Namco Super Wars
Add a photo to this gallery

Retrieved from "https://namco.fandom.com/wiki/Kamuz?oldid=8948"
Community content is available under CC-BY-SA unless otherwise noted.