Ordyne (オーダイン Ōdain) is a side-scrolling shooting game released by Namco in 1988 for arcade only in Japan, running on the Namco System 2 hardware. The game was later ported onto the NEC TurboGrafx-16 in 1989 in Japan and North America.

The original arcade version was also released as part of Namco Museum Vol. 4 for the Sony PlayStation in 1996, and for the Nintendo Wii Virtual Console in 2007 (TurboGrafx-16 version) and 2009 (arcade version, Japan only).

The genius scientist Dr. Tomari has invented an atomic conversion device named "Ordyne". He gave the boot device of Ordyne to his fiancée Kana in the form of a pendant. A day before their wedding, the villainous Kubota kidnapped Kana to steal Ordyne's key. To rescue his fiancée and recover Ordyne's key, Dr. Tomari and his assistant Sunday Chin set out in small aircraft to fight against Kubota's evil forces. 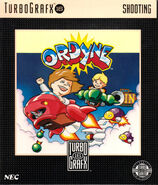 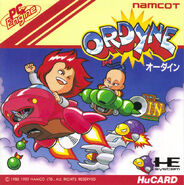