A pirate (海賊, Kaizoku?) is the name given to sea robbers that practice piracy. Pirates usually appear as enemies in games featuring them.

The pirates are reptilian-like beings that travel through the Lorelei Sea.

In Sandra no Daibōken: Valkyrie to no Deai, Kurino Sandra and his friends are attacked by the pirates, and Sandra enters the pirate's ship to help his friends and search for the light crystals. After defeating many of them, Sandra meets with the captain, who asks for him to join them (If the player agree, Sandra throws Zul in the sea and becomes a ruthless pirate, but later Zouna transforms him into a Black Sandra). Disagreeing, Sandra faces the captain, who can shot hooks. When defeated, the captain drops a light crystal and the ship sinks.

In the remake of Valkyrie no Bōken: Toki no Kagi Densetsu from Namco Anthology 2, the pirates return with a flying ship. They attack Valkyrie when she is passing the rainbow bridge. They shot arrows and attack with the ship's cannon. When all cannons are destroyed and the pirates defeated, the captain attacks by throwing knives. The ship falls after their defeat.

Pirates appear in Chapter 2 as enemies with two varieties, the Pirate and the Pirate Thug. The pirates from this game also appear in Namco Super Wars.

The pirates' boss in Sandra no Daibōken. 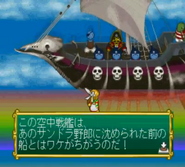 Pirates in the Valkyrie no Bōken remake.
Community content is available under CC-BY-SA unless otherwise noted.
Advertisement