Quarkman (コアクマン, Koakuman?, named Cualkman in Whirlo) is a humanoid species from the Valkyrie game series. They appear as enemies in Valkyrie no Bōken: Toki no Kagi Densetsu and Namco × Capcom, and in the first part of the Alsandra Mountain in Sandra no Daibōken: Valkyrie to no Deai.

Andy (アンディ, Andi?) is a pink Quarkman from Sandra no Daibōken: Valkyrie to no Deai that lives in the Alsandra Mountain. One day, the King of the Crescent Moon took Andy's child Sabine hostage and forced the Quarkman tribe to work for him. When Kurino Sandra tried to free Zul, Andy tried to stop him, but was defeated. Andy explains the situation to Sandra and he agrees to help Andy fight against the king. When the king is defeated, he casts a meteor shower, making Sandra, Andy, and Sabine fall from the mountain in separated locations. Later in the game, Andy is reunited with Sabine in Neverland.

Sabine (サビーヌ, Sabīnu?) (Steven in Europe) is Andy's child, which was captured by the King of the Crescent Moon. When the king was defeated, Sabine felt from the mountain and lived alone for some time, growing up during the period. When Sandra and Sabine helped Andy in Neverland, Andy recognized Sabine by seeing the bells in Sabine's arm. In the remake of Valkyrie no Bōken: Toki no Kagi Densetsu, Sabine asks Valkyrie to help Kurino Sandra, and helps her in some parts of the game. Sabine is also a playable character in the crossover Namco × Capcom, being partnered with Kurino Sandra.

Michelle (ミシェール, Michelle?) is a Quarkman from the spin-off Valkyrie no Densetsu Gaiden: Rosa no Bōken. 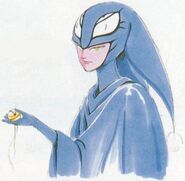 Sabine in Sandra no Daibōken