Sandra (サンドラ, Sandora?) is a green humanoid species from the Valkyrie series that habit Marvel Land. Most Sandras seen in the series live peacefully in Sand Land. When the demon Zouna was freed, Sand Land was plagued, and many Sandras where transformed into Black Sandras to work for him. One of the Sandras, Kurino Sandra, is a main character in the series. In Valkyrie no Bōken: Toki no Kagi Densetsu, Sandras appear as vendors and as an item dropped by Black Sandras.

Kurino Sandra (クリノ・サンドラ, Kurino Sandra?), known as Whirlo in the European version of Sandra no Daibōken: Valkyrie to no Deai, is a Sandra that lives in Sand Land with his wife and son. When his son became ill, he travels around the world with a pitchfork to find a cure, learning about the Dream Medicine (Sun Cure in Whirlo). Zouna transforms him into a Black Sandra and is ordered to protect the pyramid in the Endless Desert. When Valkyrie goes to the desert in the Valkyrie no Bōken remake, the two fight and she manages to return Kurino to his normal state.

In Valkyrie no Densetsu, Kurino travels with Valkyrie to recover the Golden Seed, and during their journey he finds a golden trident and a golden armor.

Bianca (ビアンカ, Bianca?) is a female Sandra from Valkyrie no Densetsu Gaiden: Rosa no Bōken that befriends Valkyrie and Rosa, but she transforms into a Black Sandra and fights against them, and transforms into a doll. She returns to normal in the end of the game.

Black Sandra is an enemy from the series, a Sandra corrupted by Zouna. In the original Valkyrie no Bōken they are common enemies in the Endless Desert, and sometimes they drop a Sandra item. They also appear as enemies in Namco × Capcom, were Kamooz changes Sandras to use them.

Kurino Sandra and Sabine appear as a playable team in the crossover Namco × Capcom, were they are habitants from the Illusion World.

A Sandra also appears as a playable character in the games Namco Super Wars and Sugoroku Adventure: The Tower of Druaga, and has a cameo appearance in Mr. Driller A and Pro Yakyuu Famista 2011. A member from the Namco Stars is named after him. 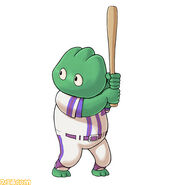 Sugoroku Adventure: The Tower of Druaga.
Community content is available under CC-BY-SA unless otherwise noted.
Advertisement