Super Adventure Game (スーパーアドベンチャーゲーム, Super Adventure Game?) is a series of gamebooks published by Tokyo Sogensha between 1985-1992, some of its works including stories based on Namco games, Back to the Future, and Dumarest saga; Japanese translations of Sorcery! and Dragon Warriors; and original stories like the series Neverland and Wolf Head no Bōken.

The Tower of Druaga (ドルアーガの塔, The Tower of Druaga?) is a book series written by Naoto Suzuki in 1986 divided in three volumes: Akuma ni Mise rareshi Sha (悪魔に魅せられし者, Akuma ni Mise rareshi Sha? roughly "The One Enchanted by the Demon"), Maguu no Yūsha Tachi (魔宮の勇者たち, Maguu no Yūsha Tachi? "The Braves of the Demon's Palace") and Makai no Metsubou (魔界の滅亡, Makai no Metsubou? "Downfall of the Infernal Realm"). Each volume contains 20 floors from the Tower of Druaga. The "Adventure Game Novel" gamebook series re-released volume 1 in 2007 and volume 2 in 2008 with a few changes.

The Tower of Druaga vol. 1

The Tower of Druaga vol. 2

The Tower of Druaga vol. 3 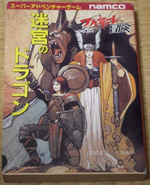 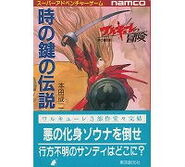 The Quest of Ki
Add a photo to this gallery

Retrieved from "https://namco.fandom.com/wiki/Super_Adventure_Game?oldid=4517"
Community content is available under CC-BY-SA unless otherwise noted.