Back to page
Edit

Taizo appeared in the slot machine. In the screen of the casino slot machine, you see him running from a pooka; goal scene with pooka and fygar, and the game play of the arcade.

Taizo become himself principle of the Namco High, with his assistant of the head cheetah, The King.

The classic and modern arcade, are avaliable on the PC. Download game:http://www.bigfishgames.com/download-games/6625/dig-dug/index.html 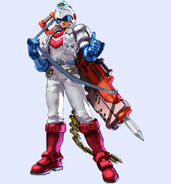 Dig Dug Island with the alike of Taizo