Tekken 3 (鉄拳3, Tekken 3?) is the third installment in the popular Tekken fighting game series. It was released on Arcades in March 1997, and for the PlayStation in mid-1998. A simplified "arcade" version of the game was released in 2005 for the PlayStation 2 as part of Tekken 5's Arcade History mode. The PlayStation version is considered by some as one of the greatest games of its genre, being rereleased with the the Best, Greatest Hits and Platinum labels.

It was the first game released on Namco System 12 hardware (an improvement to the original two Tekken games, which used Namco System 11). It was also the last installment of the series for the PlayStation.

Tekken 3 maintains the same core fighting system and concept as its predecessors, but brings many improvements, such as significantly more detailed graphics and animations, fifteen new characters added to the game's roster, more modern music and faster and more fluid gameplay.

Perhaps the most noticeable change from Tekken 2 fight system is movement reform - whereas the element of depth had been largely insignificant in previous Tekken games (aside from some characters having unique sidesteps and dodging maneuvers), Tekken 3 added emphasis on the third axis, allowing all characters to sidestep in or out of the background by lightly pressing the arcade stick (or tapping the controller button in the console version) towards the corresponding direction. Another big change in movement was that jumping was toned down, no longer allowing fighters to jump to extreme heights (as was present in previous games), but keeping leaps to reasonable, realistic heights. It made air combat more controllable, and put more use to sidestep dodges, as jumping no longer became a universal dodge move that was flying above all of the ground moves. Other than that, the improved engine allowed for quick recoveries from knock-downs, more escapes from tackles and stuns, better juggling (as many old moves had changed parameters, allowing them to connect in combo-situations, where they wouldn't connect in previous games) and extra newly-created combo throws.

Tekken 3 was the first Tekken to feature a beat 'em up Streets of Rage style minigame called Tekken Force, which pitted the player in various stages against enemies in a side-scrolling fashion. If the player succeeds in beating the minigame four times, Dr. Bosconovitch would be a playable character (granted that he is defeated first). This was continued in Tekken 4 and succeeded by the Devil Within minigame in Tekken 5 - but Boskonovitch was dropped as a playable character after Tekken 3. There is also a minigame called Tekken Ball, similar to beach volleyball, where one has to either "charge" a ball (hit the ball with a powerful attack) to hurt the opponent or try to hit the ball in such a way that it hits the ground in the opponent's area, thus causing damage.

As Kazuya's body burns, the Devil appears before the pregnant Jun Kazama in a bid to enter the soul of the new life beating within her. But in a desperate struggle for the future of her child, Jun defeats Devil and retires to desolate Yakushima so as to raise Kazuya's son, Jin, alone.

Having regained control of the Mishima Conglomerate, Heihachi sets about to further increase his powers. He embarks on a crusade to win the trust of world leaders by putting wars and conflicts to rest. Using his immeasurable wealth, he forms the Tekkenshu, a mercenary group employed to quell conflicts efficiently. He also takes a strong interest in the well being of developing nations by helping them build agricultural systems that will sustain them. Through Heihachi's efforts, the world appears to be regaining peace.

Under Heihachi's orders, the Tekkenshu are excavating a Central American archeological site when they discover a mysterious life form. Heihachi orders the creature's capture, but loses contact with the Tekkenshu after a garbled radio message, "... they are all dead... Toshin (Fighting God)?!..."

Upon arriving at the dig, Heihachi finds a field of corpses. Heihachi is wracked by sorrow, but also realizes that the power of the mysterious life form could be the key to his long dormant dream of world domination. To obtain this mysterious power of Toshin, and the world, Heihachi tempts the fates once again...

Within weeks, strange disappearances occur throughout the world. Persons of strong soul, masters of martial arts and other derivative fighting disciplines are reported missing... with no knowledge of their whereabouts.

Jun Kazama instinctively picks up on the dark power encroaching on her life. She has no understanding of what it is, but senses that she has become a target. Accepting her destiny, she tells Jin everything she knows of their haunted past to prepare him for the fateful day she now feels is imminent. She tells Jin to go to his grandfather Heihachi if anything befall her.

Her intuition proves right on a cold, stormy night. Toshin comes to the mountains bringing a chilling, swirling wind. "Run away!" cries Jun. But against his mother's pleas Jin opts to face Toshin for whom he is no match and is knocked unconscious.

When Jin awakens, the house and everything around it is burned to the ground. Jin searches frantically for his mother but she is nowhere to be found.

Jun has died at Toshin's hands. Honoring her instructions, Jin goes to Heihachi and begs to be trained in order exact revenge. Heihachi, hearing Jin's tale, is convinced that Toshin is after the souls of powerful fighters. To attract Toshin, Heihachi decides to host The King of Iron Fist Tournament 3.

They said it couldn't be done.... they were WRONG! Tekken 3 is coming to PlayStation with even more play modes than before, improved graphics, and over 1,000 thundering attack moves! Heihachi and Kazuya lock horns for the final time to decide who is the head of the Mishima Financial Empire. Tremendous wealth and power to go to the winner. For the loser, a burial in a volcano crater. But for the greedy Heihachi, even this is not enough as he prepares for global domination. And then, a baby is born... Fifteen years later, a secret excavation by Heihachi's Tekken Force unearths an unusual find. In their final communiqué with Heihachi, his men report the sighting of a mysterious "God of Fight". Heihachi immediately heads to the scene aboard his private jet, but upon arrival, he finds only scattered corpses. The wheel in his head starts to spin... "Who is responsible? What kind of thing could do this?" Within weeks, strange disappearances occur throughout the world. The baby is now a teenager. He seeks out Heihachi and introduces himself as Jin Kazama, only son of Jun. His family has been wiped out by this "God of Fight", and now Jin wants revenge. Upon hearing Jin's story, Heihachi is sure that the "God of Fight" must thrive on the spirits of the strong. He decides to resurrect "The King of the Iron Fist Tournament" one more time in order to lure the God of Fight into a trap. Jin enters his 19th year. Four years of tuition under Heihachi Mishima have prepared him for his meeting with destiny. The tournament is about to begin...

Tekken 3 has only a few returned characters, but mostly new characters. Many characters that were in the original Tekken and Tekken 2 did not return to this game; most do return to Tekken 4 however. Tekken 3 also has some characters which are only in this game, and not featured in another.

These six characters can be unlocked using a cheat device such a Gameshark or Action Replay. Four of them are Tekken Force enemies, one is a character playable in another Tekken game, and another is a irregular spin-off character: 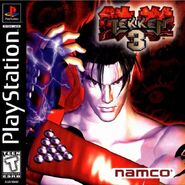