Twin Girasu (ツインギラス, Tsuin Girasu?) is a large two-headed monster from the Valkyrie video game series. It first appeared as one of the strongest enemies from the game Walküre no Bōken: Toki no Kagi Densetsu, and is a boss in its remake from Namco Anthology 2. Twin Girasu is the first boss from the games Walküre no Densetsu and The Glory of Walküre. 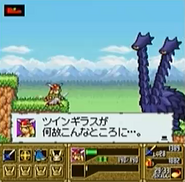 The Glory of Walküre
Add a photo to this gallery
Retrieved from "https://namco.fandom.com/wiki/Twin_Girasu?oldid=8278"
Community content is available under CC-BY-SA unless otherwise noted.