[1]Valkyrie (ワルキューレ, Warukyūre?), also romanized as Walküre ("Valkyrie" in German) in Japan,[1] is the protagonist of the Valkyrie series.

Valkyrie is the child of a god and lives in the sky. When Marvel Land was in great danger because of the evil Zouna, the maiden Valkyrie descended from the skies in Valkyrie no Bōken: Toki no Kagi Densetsu to stop the Demon King. She faced many perils and befriended several allies like Kurino Sandra during her quest (having a short appearance in Sandra no Daibōken: Valkyrie to no Deai). Valkyrie passed by different continents until she reached Zouna's domain. After Zouna's defeat, Valkyrie returned to the skies.

In Valkyrie no Densetsu, Valkyrie descends from the sky once again, this time to stop the evil Kamuz. She is joined by Sandra to recover the Golden Seed.

A warrior maiden in service to the Goddess who rules the Heavens. While she has the strength of conviction to bravely face down whatever challenges confront her, she is also possessed of a merciful and meek personality, and is always very polite.
In battle she uses her exceptional sword skills and a variety of magic to attack. When the Demon King Zouna revived and peresecuted the people of the Earth she stood against and ultimately defeated him.
After that, the Demon Kamuz also appeared, stealing from the mortals the "golden seeds" that grant any wish and seeking to use them to rule the world. Valkyrie descended to Earth again to face this new crisis and restore peace, and after a long battle manage to seal Kamuz away.

Valkyrie appears as a playable character in the games Namco Super Wars, The Glory of Walküre, Namco × Capcom, Druaga Online: The Story of Aon, Namco Chronicle, and Project X Zone.

Valkyrie also appears in other media related to her, and has cameo appearances in several Namco games like Marvel Land, Seme COM Dungeon: Drururuaga, Sugoroku Adventure: The Tower of Druaga, some games from the Tales series, as an alternate costume for Cassandra in Soul Calibur II, and other games.

Valkyrie is the main character in the Walküre manga series and the Valkyrie webcomic from ShiftyLook.

This is a list of game appearances for Valkyrie. References, such as costumes, are not counted. 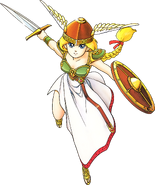 Druaga Online: The Story of Aon

Sugoroku Adventure: The Tower of Druaga 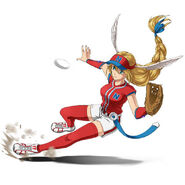 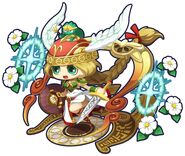