Walküre no Densetsu (ワルキューレの伝説, Warukyūre no Densetsu?, lit. "The Legend of Valkyrie") is a 1989 arcade game from the Valkyrie series. The game was ported for the PC Engine in 1990 and both the arcade and PCE versions were released for the Wii's Virtual Console between 2008 and 2009. The arcade version is also part of the game collection Namco Museum Vol. 5, being the only time it was released outside Japan. The game features Valkyrie and Kurino Sandra in a quest to recover the Golden Seed and bring it to the North Spring.

Player one controls Valkyrie and uses a sword while player two controls Krino Sandra and uses a trident. The players can also find items and improved weapons or buy them with Zul, and it's possible to find different types of magic that can be used by holding down the attack button.

Note that in the PC Engine version, stages 5 and 6 are swapped and Black Valkyrie appears before the battle against Kamuz. 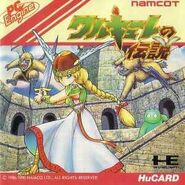