Warp & Warp (ワープ & ワープ, Wāpu to Wāpu?) is an multi-directional shooter arcade game released by Namco in 1981. It runs on Namco Warp & Warp hardware, one Intel 8080 processer running at 2.048 MHz, and was liscenced to Rock-Ola for US manufacture and distribution under Warp Warp. It was released on Namco History Vol. 4 and was ported to the MSX computer. A remake titled Warpman was released in 1985 for the Famicom. A ShiftyLook webcomic adaption was made, known as The Five Dimensional-Adventures of Dirk Davies.

The player controls a "moster fighter" with the joystick, and to press the button to shoot. The player must kill the 20 "Bero-Bero" enemies to complete a level (much like the company's Tank Battalion, which ran on the same hardware). Shooting the same colored alien three times will make a bonus enemy appear, which can be shot for bonus points. The aliens change from yellow, to orange, to red as they get closer to the center.

At somepoint the center area will flash "ワープ" (WARP in the US version), and the player will be able to enter the "maze world". The player cannot shoot the enemies: he.she must use bombs to destroy them. The bomb can be delayed while the plaer holds the button, but the bomb will get stronger when he/she kills multiple enemies, however the "monster fighter" can get killed if he touches his own explosion.

Levels are indicated by flags at the bottom. After the 48th flag (like Galaxian and King & Balloon), the flags will stop updating, but the game will continue on. The indicator on lives is similar to this glitch: they will stop updating after four lives, but the player can still get more lives, until he/she reaches over 1,000,000 points, in which they will roll over. 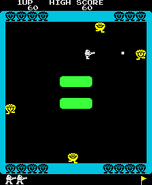 Up-close image of a Warp & Warp machine
Add a photo to this gallery
Retrieved from "https://namco.fandom.com/wiki/Warp_%26_Warp?oldid=7460"
Community content is available under CC-BY-SA unless otherwise noted.