Xevious (ゼビウス, Zebiusu?) is a vertical shooter arcade game released by Namco in 1983. It runs on Namco Galaga hardware, and is one of the earliest vertical scrolling shooters video games.

Several centuries ago a population with advanced technology left Earth to escape the Ice Age. In the 21st century, the Xevious people, leaded by the bio computer GAMP (ガンプ, Ganpu?), return to Earth and tries to conquer it with their army, taking control of several areas. The player controls the ship Solvalou and must defeat the invading Xevious army. 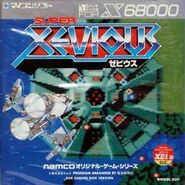 Super Xevious (Sharp X68000)
Add a photo to this gallery

Retrieved from "https://namco.fandom.com/wiki/Xevious?oldid=8149"
Community content is available under CC-BY-SA unless otherwise noted.