Xiaomu (小牟, Shaomu?) and her partner Reiji Arisu are the protagonists from the game Namco × Capcom, and they also appear as a playable characters in the games Project × Zone, Project × Zone 2: Brave New World, Super Robot Taisen OG Saga: Endless Frontier, and Super Robot Taisen OG Saga: Endless Frontier EXCEED. Xiaomu is also playable in Walküre no Bōken: Toki no Kagi Densetsu with Xiaomu, which was only included with a special edition of Project × Zone 2 in Japan, and appears in Brave Company.

Xiaomu is a member of the secret organization Shinra, which investigates disturbances in space and time called "fluxes". She is a 765-year old Sage Fox (仙狐, Senko?, a fox spirit that becomes a Tenko (天狐) when it reaches over 1000 years old), but despite her age, she is somewhat flighty and immature. Her free-wheeling spirit and licentious tongue are a counterpoint to the stoic nature of Reiji, but the two of them are fast friends and trusted partners. Xiaomu mainly fights using a mystic sword and magical attacks, but she also packs twin pistols.

A member of Shinra. Reiji's partner, she has been in the organization for (considerably) longer than he has.
Although she looks like a young girl, she is actually a 765-year old "Sage Fox," a type of vulpine monster.
After Reiji's father Shogo was killed in the course of a Shinra mission, she taught Reiji how to fight in his place. During combat she uses a swordstick called "Suiren" and two pistols called "Silver" and "Platinum."
She also uses various mystical arts, talismans, divination and even professional wrestling.
Always cheerful, if a little cheeky.
Her hobbies qualify her to be a high-level otaku who enjoys anime, comics, games, and the internet.

This is a list of game appearances for Xiaomu. References, such as costumes, are not counted. 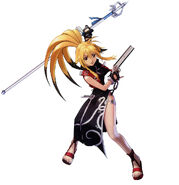 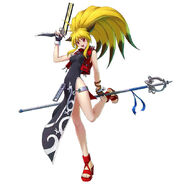